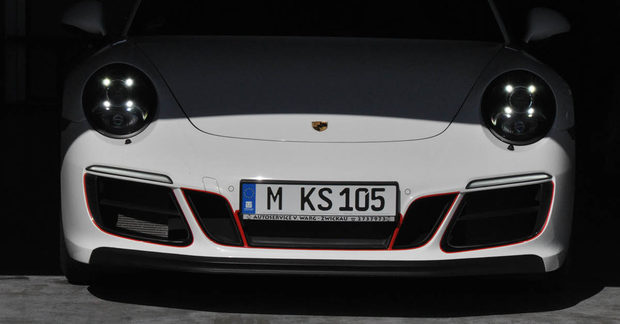 Kathrein and Tönnjes used a German racetrack to test and demonstrate the effectiveness of UHF RFID tag reads at speeds greater than 220 kilometers per hour, utilizing Kathrein's readers and software and Tönnjes' IDePLATE tags.

Technology companies Kathrein Solutions and Tönnjes have completed a test of Tönnjes' IDePLATE and IDeSTIX tags with Kathrein's reader and software platform, and have captured tag reads at speeds of more than 220 kilometers per hour. They did so for an audience of existing and prospective customers, in order to illustrate how effective the latest iteration of their technology is. The companies also demonstrated a new tag designed for motorcycle headlamps.

Kathrein Solutions is a German Internet of Things (IoT) company that provides RAIN RFID solutions. Tönnjes offers vehicle identification solutions, including the IDePLATE license plates with integrated RFID tags, and the IDeStix adhesive tags that can be applied directly to a vehicle's windshield. While the companies are providing their passive UHF RFID-based technology for a handful of government agencies, they wanted to demonstrate what the system was capable of, so they scheduled a test at Germany's Sachsenring racetrack, in the city of Chemnitz, and invited potential customers. Approximately 90 guests from 30 countries watched the testing take place.

During the test, the partners operated vehicles in a variety of scenarios, tracking their movements using tags and readers designed for electronic vehicle registration systems and electronic toll collection. Each vehicle had an IDePLATE on the front and rear, as well as IDeSTIX tag on the windshield or motorcycle headlamp, and installed Kathrein's RRU4500 readers around the track. Read data was managed by Kathrein's CrossTalk software platform. "We've done testing before," says Thomas Brunner, Kathrein's head of IoT solutions business line, "but never invited customers to attend, so this was our opportunity to demonstrate the robustness of the system."

The testing consisted of heavy trucks, cars and motorcycles. As they circled the track, Kathrein reader antennas captured each tag's unique ID number and updated the software accordingly. They tested the tags in crowded environments, in which vehicles follow closely behind each other on the track, as well as on vehicles travelling at high speeds and on changing lanes. Moreover, they tested the newest product: the motorcycle headlamp tag.

Kathrein acquired NoFilis three years ago (see Kathrein Group Acquires NoFilis) and has since leveraged the automatic identification software from that acquisition to offer solutions using its own UHF readers and antennas for the automotive, industrial, logistics, tolling and parking sectors. The company has been offering end-to-end solutions for roadside vehicle identification, or for outdoor access control at such locations as parking lots and garages. "One important market for us, with Tönnjes as partner," Brunner, "is vehicle identification for governments, while also providing a solution with a government transponder for tolling."

Traditionally, tolling companies have offered active 5.8 GHz transponders requiring a battery to transmit data, but Kathrein has moved into the market of providing passive RFID technology compliant with the ISO 18000-63C standard, with Tönnjes as its global partner for government-mandated electronic vehicle identification. Tönnjes' tags employ NXP Semiconductors' UCODE DNA chipset, which supports up to two 128-bit AES authentication keys. They are stored in the tag IC's internal memory and can be pre-programmed and locked. These cryptographic keys can be used either for tag authentication or for privacy protection.

Initially, says Jochen Betz, Tönnjes' managing director, the tags could be read at a speed of 130 kilometers per hour. However, that wasn't fast enough for every application, since vehicles travel faster than that on many European roadways—especially if they are trying to elude a toll-collection system.

Last year, the two technology firms worked together on firmware updates and antenna configuration in order to boost read effectiveness. At the time, Kathrein's readers were able to accomplish tag reads when the Tönnjes tags were moving at 160 kilometers per hour. With further engineering, Betz reports, they raised that speed to a maximum of about 220 kilometers per hour. "Our focus is the mandatory introduction of RFID as part of registration," he states. Several motor-vehicle agencies in Peru, the Cayman Islands, Kenya and the Philippines have already deployed the system, while other agencies are currently in pilots.

Launching a nationwide solution is a large-scale, multiple-year project, Betz notes. It requires building up reader infrastructure across a country, while also enabling that nation's motor vehicle or transportation agency to distribute tags to drivers as they have their vehicles registered. Most such agencies are focused on initially using the technology for toll collection, but the license plates, with integrated tags, also provide electronic identification. Some countries are looking at expanding the use case to access control or fueling stations, Brunner says, adding, "So going forward, applications are as many as you can imagine."

In addition, Kathrein is providing a hybrid solution that combines optical and RFID technologies. Such a system could capture the tag ID number of a vehicle moving past an RFID reader, while taking a picture of both the license plate and the vehicle. Such a hybrid system, utilizing cameras and RFID readers, is being rolled out in Egypt, Brunner says. Coupling cameras with readers enables the gradual transition to RFID systems, he explains, with the cameras being used to identify license plates that don't yet have RFID tags attached to them.

"It can be important to combine the two technologies," Brunner states, "and to add the features each offers." For instance, RFID cannot identify a vehicle's color, but with camera data, software could be employed to recognize if a car did not match the description of the particular vehicle for which its tag was intended. In that way, the technology could potentially identify stolen vehicles.

This was the first time the technology has been demonstrated with motorcycles, trucks and cars in front of a large audience, the companies report. The technology firms are now setting up a pilot with one country's agency that was present for the demo, and they are following up with other attendees as well. The companies aim not only to attract new customers, but to help existing customers expand their use cases. "We'd like to see applications that build on the technology already in use by our existing customers," Betz says. "Events like the racetrack demonstration are excellent for that." The technology is typically installed by systems integrators.